The Homart Project - Los Angeles
Out of the Shadow into the Light of L.A. - 1987

Artist-in-Residence at The Wilshire Landmark 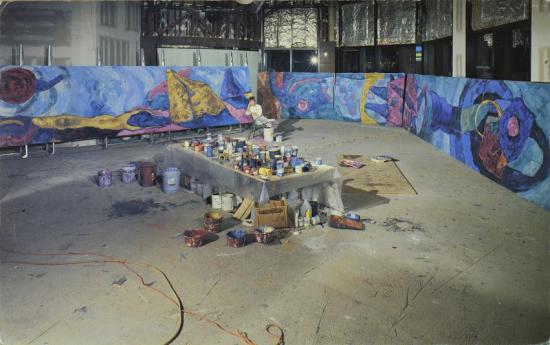 Mural Unveiled as Part of Homart´s “Art for L.A.” Program

The Los Angeles community recently witnessed Homart Development Company´s unveiling of a 260 foot original work of art on Wilshire Blvd. in Los Angeles. A proclamation from Mayor Tom Bradley and the City of Los Angles named March 28, 1988, the day the mural was unveiled, as “Art for L.A. Day.”

“I would like to commend Homart Development Company for the scope of its vision in commissioning artist Margaret Kelley to create the mural. They have created a very positive environment. I thank Homart for sharing Ms. Kelley´s talents with the public,” Bradley said.

The mural, entitled “Out of the Shadow and Into the Light of L.A.,” was signed by artist Margaret Kelley during the unveiling ceremony. Kelley was the “artist in residence” at The Wilshire Landmark where she created the mural.

The project was curated by Los Angeles curator Edward Goldman who advises Homart and Company on their corporate art collection. At Goldman´s suggestion, Homart established an artist-in-residence program by utilizing unoccupied space on the ground floor as a studio for painter Margaret Kelley. The mural was commissioned by Homart as a beautification project for Los Angeles, according to Chris Stirling, senior development direction for Homart in Los Angeles. “Rather than a traditional construction barricade, Homart is bringing attractive, dramatic, original art to the streets of Los Angeles.” Now erected, the Kelley piece is currently the longest painting in Los Angeles.

Edward Goldman writes of the artist, “Margaret Kelley´s abstract compositions exude extraordinary energy and are monumental not only in size, but in spirit. Kelley´s handling of color and shapes in a highly personalized style reveal a remarkable strong individual living in a world of her own making, a world filled an appealing, sometimes even frightening intensity. Most important, the artist is willing and able to open that world to the viewer. Margaret Kelley exhibits great control in her paintings, and out of the ecstasy, joy, pain and hope that constitute the drama of life, there is an impression of victory and transcendence, and ultimately of order restored. Kelley´s marks and shapes require space in which to travel, as they explore their charge terrain. Though her ´language´ is personal, it eliminates frames of reference known to us all.”

Margaret Kelley returned especially from Germany where she has lived and worked as an artist for the last eight years to work on this project. According to the artist “Out of the Shadow Into the Light of L.A.” describes an ongoing dialogue between two different realities she had experienced, depicting the conflict between American ideals of self-determination and free will versus ideas of pre-determination, fate and destiny which had permeated her existence in Germany.